I’m not gonna lie, I’m not sorry to see 2012 go. It was not a banner year for me for a multitude of reasons…and of course, I’m going to make a list because that is one of my most favorite things to do! Let’s start at the beginning:

Now, towards the latter part of the year I finally realized that I had to make some changes in my life or I was going to become someone who I truly disliked.  I couldn’t just sit there and be apathetic.  My Grandma Iva would be so mad at the way I was acting if she were here so I had to figure out how to better my situation.  And there were a couple of good things that happened in 2012:

So what’s 2013 going to bring me?  Actually, let me re-phrase that.  What am I going to bring to 2013?  I’ve got some pretty good ideas but I don’t want to share just yet.  No, I haven’t met anyone (Match.com still sucks) but I’ve been working on some goals for the year and maybe I’ll be willing to share them.  I think I’ll save that for the next blog.  I’ve been waiting a little too long between blogs so maybe that should be my first goal….blog more.

If you know me, I tend to be wordy so if you want the short version: I’ve not found Mr. Tall Right. In fact I’ve not even gone on a single date yet!

For those of you that want the tall version, read on…

I have not found Mr. Mantastic yet…I’m sure he’s out there but….

So if you remember I uploaded my profile onto Match.com with baited breath, crossing my fingers, and hoping for the best all the while keeping my expectations very low.  I’m SO glad I’ve kept my expectations at an all time low.  I’ve received many winks which have sparked no interest in me and I’ve received 1 email.  Okay, technically I’ve received 3 but 2 of those emails are from my friends, Dave and Jeff, so those don’t really count 🙂 (sorry guys).

I went into my profile this morning thinking maybe it’s too long.  So I deleted a couple of things to shorten it up and resubmitted it.  I personally think my profile is kinda funny, explains who I am, but isn’t terribly long so whomever reads it isn’t bored by the end.  But I’m simply not getting noticed OR I’m just too tall OR I’m not as funny as I think I am OR…the list is endless.

The Match Profile is like the resume of dating and I’m failing at this first step in the process.  I’ve actually used a professional resume service to beef up my professional resume so I’m wondering do I need that for my profile?  I met my last boyfriend randomly at a Portland Skyliner tall club event so do I need to hang around tall clubs?  What’s a tall girl to do? 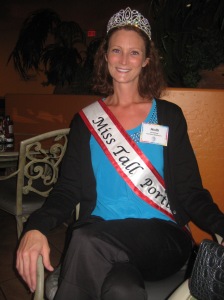 I was also Miss Tall Portland once upon a time. What a fun time that was!

This whole dating thing is really no fun for me.  BUT, I can’t just hide myself away….I’m such a catch.  (Please read this dripping with sarcasm as that’s how it’s being written.  And a further disclaimer: please don’t feel the need to stroke my ego with compliments, I’m truly not fishing for any, I simply like to be sarcastic sometimes)

Let me start out by saying that I strongly dislike being single.  My last relationship was 4 1/2 years and I miss being part of a couple.  I like the partnership, the fun, the giggles, the ability to do things together: movies, dinners, snuggling, anything really.  I had thought this last one was forever but I guess you both need to want the same things, right?  So here I am starting over and trying to figure it all out, once again.

Which brings me to the how.  How do you meet people?  I’m 39.  When I was in college you met people…in college.  In classes, at the bar, at the library.  People were everywhere!  Now if I go anywhere, I find that the men are all married.  Or really short.  But let me clarify my last point, height doesn’t matter THAT much to me although my last relationship taught me that having someone close to my height was really nice.  I’d prefer to have my next man/boyfriend/lover to be able to gaze longingly into my eyes….

So what do I do?  How can I meet single, taller men?  Well….I’m choosing Match.com.  Last week I uploaded my profile and crossed my fingers.  I tried Match years ago and was disappointed.  I got tons of ‘winks’ from very old men and extremely short men.  Nothing against either, but definitely not what I was looking for.  Maybe it was a good lesson for me because now I have low expectations and high hopes.

One of my profile pictures. Will it snag me a date? Wait and see!

So here I go….wading out into the seemingly uncrowded dating pool.  Will I be lucky in love?  I’ll keep you updated periodically as I continue this journey.  Wish me luck!  Keep reading to find out more…..  😉

As you all know, I finished reading The Tall Book by Arianne Cohen a short while ago and I decided as opposed to doing a full review of this awesome-tastic book I’d do a count down of the top 5 coolest things I learned from the book.

If you’re keeping a track #5: Tall men have their pick of the tall ladies and #4: Fit Size and tall clothing manufacturers.

#3: I’m not gonna die sooner cause of my heart

I’ve always had an understanding that cause I’m tall that some how my circulation is bad. That my heart pumps slower or something like that just because I’m tall. It makes logical sense right? I grew up with stories about how Andre the Giant had died because of a bad heart. (Of which, I can’t find proof of that.) That being huge meant that somehow blood just doesn’t travel as well. It’s apparently completely untrue. Phew…..

APPARENTLY, The thing I should have been scared of all this time was Cancer. For tall guys, the odds of getting cancer increase 30%. Why? Not to over simplify, but being tall means an over abundance of growth hormones. Cancer is an over abundance of cells. It’s a bit of a leap, but there not being an overabundance of science about why tall health is the way it is, other than taking medical records, scanning for height and health related issues, and churning out the fact that I’M GOING TO DIE OF CANCER!!!!!

Still, nice to know that if I die of heart problems it will have little to do with my height and more to do with poor genetics. (My Dad has a pace maker……)

About 2 years ago, a friend of mine, Andy, was killed in a car accident. Not to get into too many details, but he too was a tall, wonderful young man and the world is a poorer place since he left.

That all being said, I’ve learned two interesting facts that have to do with your health because of Andy and here they are:

#1: If you donate blood, they take more out of you because your a giant.

Last fall, I started donating blood at the local blood bank as often as they let me. I was asking myself how I could make up for the fact that such a great guy was missing from the planet and I did what I thought he would do. And my monthly trip to the blood bank for apheresis, which is a 2 hour process where they pull out plasma, platelets and red blood cells was born. And according to Andy’s mom, he did that every month too. Specifically, the apheresis as well.

#2: The taller you are, the harder it is to find you a donated heart if you need one.

Apparently, even if a heart matches you perfectly for a transplant from an organ donor, they can’t give it to you if it’s the wrong size. If you’re tall, giving you a heart that’s too small might just kill you again anyway. So while Andy’s kidney went to a little 12 year old girl, his heart went to another big guy who needed a larger heart.

Only 5% of the population that is eligible does. So when you donate, you make a huge difference.

Also, if you’re a giant, like me, with a little free extra time you can help even more people. Fear of needles is not an acceptable excuse. You’re huge. The only thing you fear is bi-planes attacking while you climb the Empire State building.